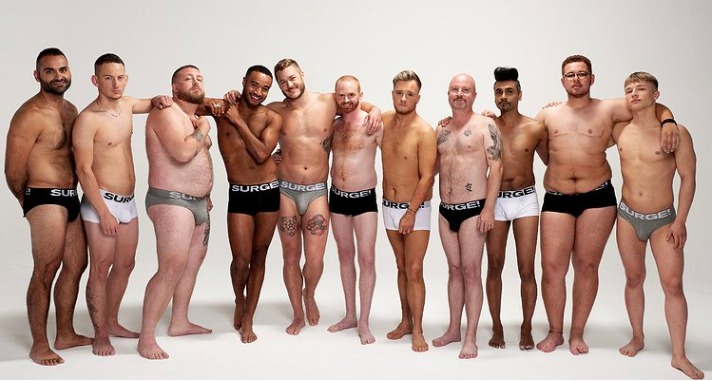 If you’re a gay guy in this day and age, you probably won’t be faulted if your have a number of issues about your body. After all, you’re often surrounded by images of men with chiseled abs, muscular arms, and a luxurious head of hair.

A new underwear brand, however, is trying to widen the everybody’s definition of male beauty. Surge Underwear is a British underwear brand that recently put out a photo shoot featuring 11 “everyday” guys in a bid to represent men of all shapes and sizes.

Austin Armacost, a former Celebrity Big Brother contestant, is the company’s brand director, and he believes that the shoot can question the impossible beauty standards pushed by other underwear brands.

“We do not want to ostracize anyone. Men with muscles, skinny guys, larger guys we want them all to feel sexy and confident when wearing our brand. Every single person is beautiful and this needs to be celebrated more,” he said.

The company also conducted a survey that revealed that one in 10 men training in gyms in the United Kingdom have muscle dysmorphia. Muscle dysmorphia is an anxiety disorder where people see themselves as small, despite being big and muscular. Muscle dysmorphia can lead to depression, steroid abuse, and even suicide.

The National Eating Disorders Association says that in the United States alone, 10 million males will be affected by an eating disorder. They also point out that men are much less likely to seek treatment for their eating disorder. The association also says that unattainable images in the media lead to male body dissatisfaction.

What do you guys think about this new shoot? Do you think it helps normalize other body types? Is Surge Underwear something you’d like to try out? Share your thoughts with us in the comments section below.