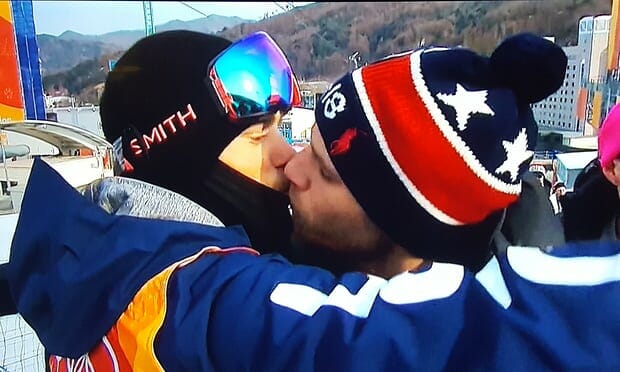 Not only did American freestyle skier Gus Kenworthy fail to repeat his win in Sochi Winter Olympics in 2014, he also finished last. That, on top of a broken thumb, which he fractured three days before the competition. And as if the fracture wasn’t enough, Gus had a bad fall during training the next day where he sustained a bruise on his hip so bad it caused a hematoma and several vials of blood had to be drained from it.

But while he may not have won an Olympic medal in PyeongChang 2018 Olympic Winter Games’  Men’s Ski Slopestyle, Gus and his boyfriend Matthew Wilkas are currently winning hearts and mind.

Right before the qualifying round for the ski slopestyle event on Sunday, the couple shared a kiss at the bottom of the hill. The kiss, followed by a hug, was so fast it didn’t even last for a second but naturally, it didn’t escape the attention of NBC and captured the moment.

The couple trended online as netizens react over at Twitter and various other social media. Check out some of the tweets below.

@guskenworthy Thank you Gus for doing the impossible.  It wasn’t gold, but you will be remembered for that tender kiss with Matt.  Keep breaking down those barriers.  You are a model ambassador for the youth of our community.  Couldn’t be prouder.

A kiss from his boyfriend from the top of the slope and a wave of rainbow flags at the bottom! Gus Kenworthy, you’re making so many LGBT Americans so very proud of you!!! 🏳️‍🌈🇺🇸 #Olympics #ItsGusBitch

Watching @guskenworthy kiss his boyfriend at the #Olympics “It’s something I was too scared to do for myself. To  be able to do that, to give him a kiss, to have that affection broadcast  to the world, is incredible. pic.twitter.com/jOkVWRtlsn #GusKenworthy

2018. One of the big four networks shows an out and proud Olympic athlete kiss his boyfriend. Thank you @guskenworthy @MattWilkas @NBCOlympics.
I can’t wait to see an NFL player do that. #LoveOverBias

So much love for @guskenworthy and his partner for smashing down barriers and being the first same-sex couple to kiss live at the #WinterOlympics 🌈❤️ pic.twitter.com/FWdrXEs4ut

“As much as I look forward to the day when queer kisses can be as ho-hum and apolitical as non-queer kisses; as long as they still aren’t, we must continue to keep kissing, telling our stories & being whoever we are without offering excuses or apologies.” https://t.co/v57bCOdD2l

Matthew Wilkas would later describe the kiss to Associated Press as “such a little kiss.” And it was, but that they could do it freely and without hesitation was why netizens were making such a big deal out of it. “If I’d have known it was a big deal, I’d have made out with him,” Wilkas joked.

For his part, Gus said the kiss was something he wanted to do in Sochi but that he decided against it, mostly because he wasn’t ready and he wasn’t out to his family and friends yet. Later, in an interview, he said, “And so to be able to do that, to give him a kiss, to have that affection broadcasted for the world is incredible.”

The kiss that wasn’t: Gus Kenworthy reflects on his decision not to kiss his then-boyfriend at the end of his final run in Sochihttps://t.co/sRTFBnyvsj

There is something special about seeing @NBCOlympics coverage of @guskenworthy that makes me feel whole. His boyfriend, their kiss, his family with the pride flags. Love is love. #olympics #love