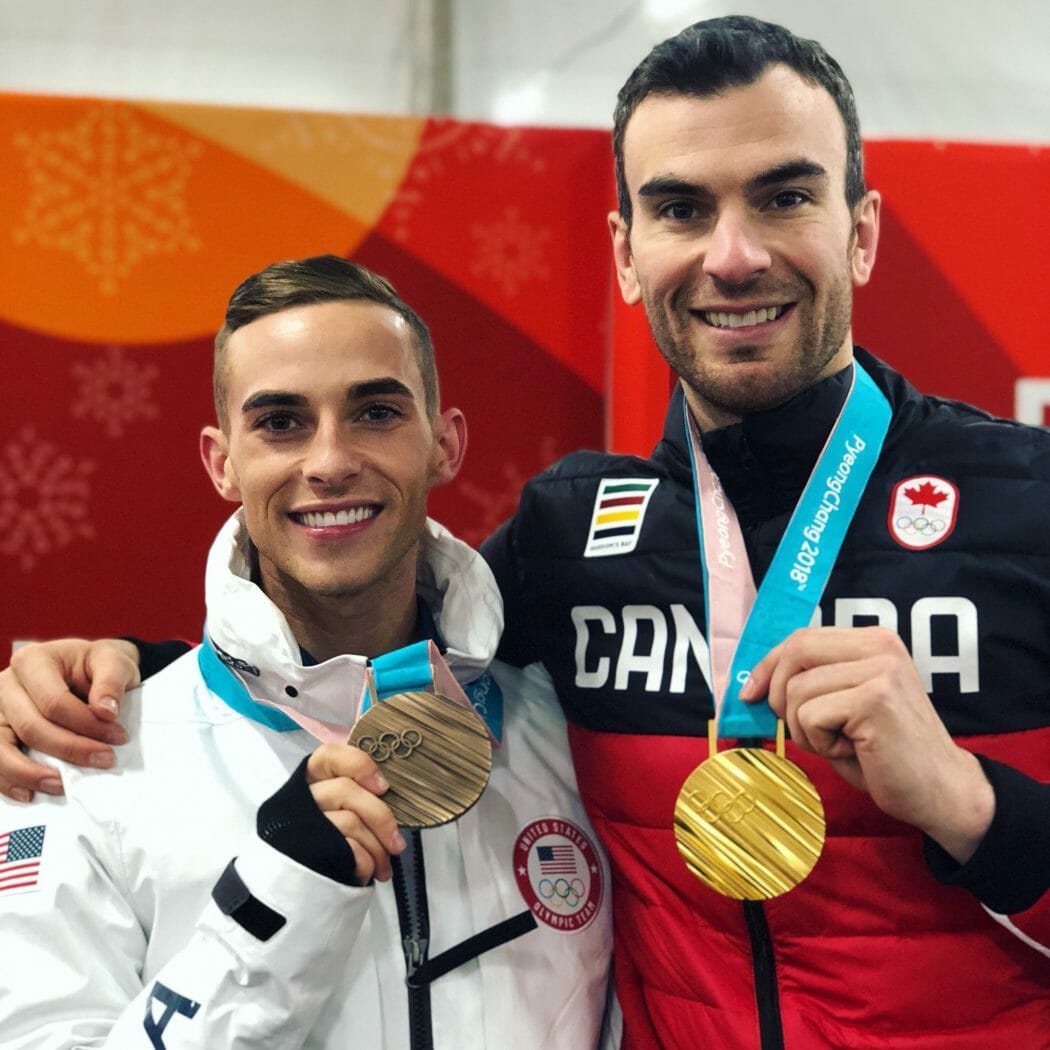 The 2018 Olympic Winter Games are underway in PyeongChang, South Korea, who’s your favorite male athlete? We certainly have been watching; in fact we spotted several male Olympic hotties who sizzled in and out of their uniforms so much they raised our body temperature despite the cold. Take a look at some of them below.

Eric Radford announced his retirement in figure skating following his gold (team figure skating) and bronze (free skating) finish at the PyeongChang 2018 Olympic Winter Games. He will, however, always be an inspiration for being the first openly gay athlete to win a gold medal at the Winter Olympics.

But Eric’s journey is not without hardships for he was “bullied and pushed around as a kid.” That, in addition to the financial difficulties the family went through, how they had to sell their cottage and their house and still be $80,000 deep in debt. He said in an interview, “There’s so many moments in life, or especially in an athlete’s life, where you’re wondering if it’s all worth it. And then you step up onto the podium and you’re like, yes. Yes, it was. All the time away from home, crying on the phone to my parents, dealing with the bullying, it all becomes worth it.” Follow Eric Radford here.

Dubbed as the “Ice Prince,” probably everything about Hanyu is beautiful: his skating, his face, his smile, and his skin. Fans call him cute, sexy, phenomenal, and adorable but he’s seriously badass in the skating rink.

Japan breathes a collective sigh of relief as #YuzuruHanyu makes his first on-ice appearance at the #Pyeongchang2018 Olympics.https://t.co/kiNkgJlJaB pic.twitter.com/gWo4dYT4fs

Skating with a right ankle freshly healed from a severe injury, Hanyu successfully defended his Sochi gold medal, a remarkable feat achieved 66 years ago by Dick Button who himself called Hanyu and his skating “gorgeous.” In addition to his numerous accomplishments, Hanyu also went down in history as the Olympian who won the thousandth Olympic Winter Games gold medal event. Natural talent and hard work aside (he is said to “train 14 hours a week in low and high seasons in Toronto, ON, Canada”), Hanyu’s unparalleled determination was born out of a calamity that left him literally running for his life while still on his skates. The Great Tōhoku earthquake and tsunami left such a huge impact on the then 16-year-old Hanyu who years later said, “I often feel that things you take for granted are not always guaranteed. Everything exists by luck. Because I almost lost everything, I came to feel this way. The disaster totally changed my values. I want to make every single day, every practice and every competition count.” Want to know more about Yuzuru Hanyu? Click here.

Michael made history in the Sochi 2014 Winter Olympics as the first Southeast Asian figure skater ever when he was 17. What began as a hobby of going to the mall rink once a week as a nine-year-old kid had turned into something serious when he started winning in international competitions.

PyeongChang 2018 Olympic Winter Games is Michael’s second Olympics. Clearly, he’s come far from this kid who had asthmatic bronchitis into this guy who inspires other dreamers for defying the odds by skating his way to the Olympics despite growing up in the tropical Philippines, a country that has no winter season. Check Michael out in his Instagram account here.

This guy has it all: a handsome face, towering height (he stands 1.83m) not to mention he’s got a beautiful smile, and a gorgeous body to boot. According to NBC, Hakeem is the “first U.S. Olympic bobsledder since at least 1998 (perhaps ever) to convert from another physically demanding exercise – bodybuilding.” Physique competition, to be precise, and he “did five shows and won three titles.” He started bobsled in 2015 and the rest, as they say, is history.

While at school, this Powhatan native played basketball, football, and track and field. His former UVA-Wise football coach said of Hakeem in an interview, “He has all you need for bobsledding. He has great speed, great strength and great agility. You have to jump and get into that sled. He’s so athletic, and all of this just fits with him. He’s a natural.” Want more of Hakeem? Check him out here.

This three-time Olympian made history when he won silver in men’s singles luge event, the “first luge medal of any kind in U.S. history since the sport was introduced in 1964.” But this American luger’s journey had been anything but smooth. In an interview with NBC, Mazdzer said, “It’s 16 years in the making. I’ve had a rough last two years, and it just shows: Don’t ever give up. Whenever you lose, keep fighting.” Chris Mazdzer talked more about his Olympic struggles below.

I took this picture right after walking home from the track after a less than ideal race. Even after an hour I could still feel the anger, frustration and disappointment deep inside and it was still coming through my eyes.  What kills me on the inside is not the fact I made a few small mistakes, what kills me and has been driving me wild for over a year now is the fact that no matter what I do my top speed and ability to be with the top guys in the world has disappeared, and I don’t know why. (Also probably the fact that I really care)  There comes a point where giving it everything you have and believing in yourself starts to fade away and I am almost to that point. For some reasons unknown to myself, things are not working out as planned. Why keep pushing on then?  Well, for starters I still believe in myself and am confident with my sliding and starts. I am not someone to walk a way during a struggle although this struggle seems to be getting the best of me… Finally, there is no way I can give up with the biggest race of my life being just weeks away and even though the last thing I want to do right now is think about Luge, that’s what I am going to do this afternoon.  There is a light somewhere in this dark cave that I feel like I am stumbling aimlessly through at times and you better damn believe I’m going to find it.  Thank you to everyone who has always believed in me, I want you to know that you always help me get through the tough times and I am looking forward to sleighing the future 😉🤘🏼 I thought about waiting to post this until after laying down and contemplating things over but writing that actually felt very cathartic. Screw it, post!

Mazdzer has a great smile and is currently dubbed as the Internet’s new boyfriend. For more of Chris Mazdzer’s hotness, you may follow his Instagram account by clicking here.

Me yesterday: “Wait so like what is ‘luge’ anyway?”

Me today, sobbing: “Luge is probably the most important thing in my life after water and air.” pic.twitter.com/jSFohvTNno — Tim Federle (@TimFederle) February 10, 2018