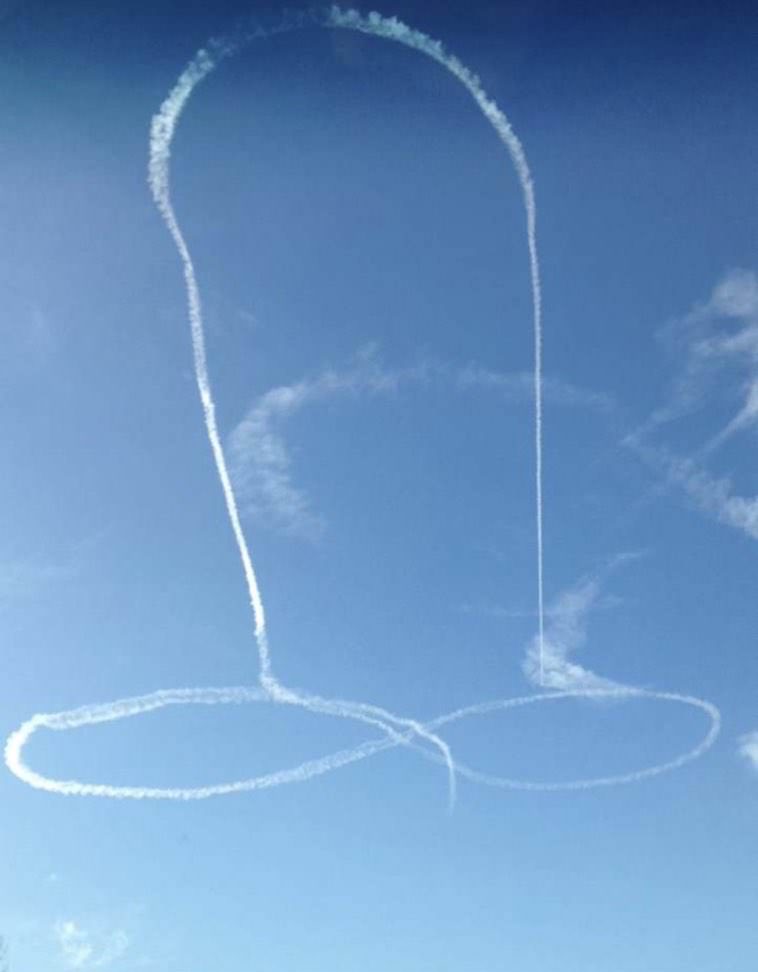 Naval Air Station Whidbey Island Officers in Oak Harbor, Washington confirmed that the aircraft responsible for the “obscene skywritings spotted in Okanogan County” is indeed theirs.

Naturally, the giant penis contrails garnered the attention of the netizens and Twitter in particular is having a field day about it but the US Navy officials are less than amused. They released an official statement through Lt. Cmdr. Leslie Hubbell, a Navy spokeswoman, saying their jet leaving white trails of a giant penis in its wake is “absolutely unacceptable.” They added that it “holds no training value and is under investigation.”

But it wasn’t just the US Navy officials who weren’t welcoming of the sight. An Okanogan mom called local station KREM 2 to complain about the penis sighting saying “she was upset she might have to explain to her young children what the drawings were.”

I don’t know about you, but this has just made my week. I mean, no matter how I see it, it takes skills in order to pull something like this off. Don’t you think so, too? Anyway, take a look below at how Twitter reacted on this matter.

They were just giving a salute to their commander in chief. I think we have more important things to worry about than a #penis cloud

After this obscene’ stunt,

DT might be thinking who’s this “DICKTATOR” 😂🤣😜 #Omak #USNavy US Navy pic.twitter.com/pZTVUKoTVG

One of my F/A-18 brothers is going to get a hand slap for drawing anatomical features in the sky over #Yakima Proving Ground & drifted to #Omak to the horror of unfunny people. But when compared to some examples by the Air Force…<grin!>#avgeek #avgeeks #myothercar #pilotlife pic.twitter.com/IjpJCkSFHR

The most monumental thing to happen in omak. A penis in the sky pic.twitter.com/SM8k1tNYaj

KREM 2 reached out to the Federal Aviation Administration (FAA) to gather more information regarding the incident. They were told by the FAA officials that “unless the act poses a safety risk, there is nothing they can do about it.”