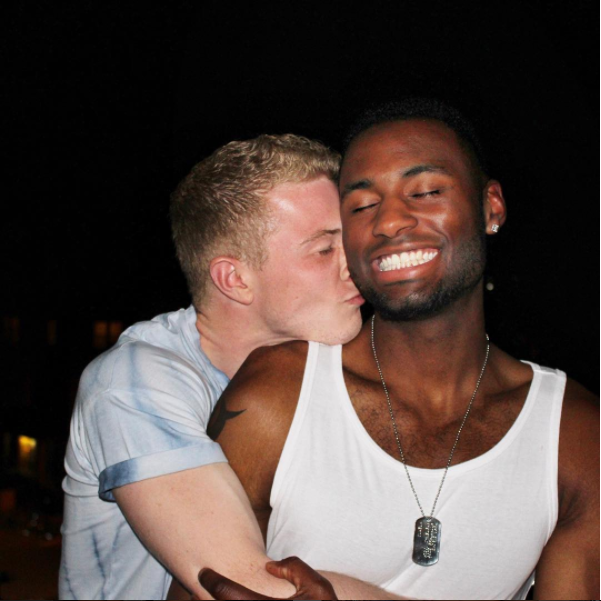 Fortunately, University of Minnesota track athletes Justin Rabon and Brad Neumann managed to defy the odds and find each other. The pair recently came out not just as gay, but as each other’s boyfriends. The two have been together since 2014, and wrote essays about their experience as gay athletes for Outsports to celebrate Pride Month.

In both their essays, Rabon and Neumann recalled childhoods spent struggling to hide their burgeoning sexuality. After stories about his “social encounter” with another guy at the University of Wisconsin spread throughout the campus, Rabon found himself depressed and with no one to turn to. He sent out a desperate text revealing that he might like men to a friend — who just happened to be Neumann.

When Neuman got that text, he responded with “Oh, that’s cool.” The nonchalant reply, however, didn’t convey the difficulties Neumann had gone through to get to that point. Neumann grew up in the small town of Peshtigo, Wisconsin, where he says “gay was the punch line to almost every joke.” One particularly harrowing experience he recalls from his childhood involves his cousin declaring in the car that he wished “all gays would die”, pushing Neumann to tamp down his nascent homosexuality by engaging in sports.

Ironically, the high school track career Neumann immersed himself in lead him to Rabon, who had bested him in a 200-meter state title.While the two went to different universities after high school — Neumann went to the University of Minnesota while Rabon went to University of Wisconsin — the two kept in touch. That connection eventually led to Rabon coming out to him on Thanksgiving 2014, Neumann eventually coming out to Rabon, and the two of them eventually dating.

Once their relationship began to blossom, Rabon made the decision to transfer to the University of Minnesota to run for their track team. The couple are now living together in Minneapolis, and Rabon is one semester away from receiving his undergraduate degree in Kinesiology with a minor in nutrition.

In their essays, Rabon and Neumann talk about how they have both helped each other become stronger through the bond of their shared experiences, as well as how being out and proud have shaped their current lives.

“I love my family, friends, and teammates, but they cannot relate to the things closeted gay athletes go through. I have gotten almost universally positive feedback from all of them, but I really owe all of my contentment in my life to Justin. Without him, I would still be living a lie to everyone around me, including myself. I am truly one of the luckiest guys out there,” Neumann writes.

“The best decision I think I’ve made was transferring schools and truly deciding to stay true to my character as a person while being here. In being myself, I have made the most genuine friends, made the greatest memories, and found myself in the process,” shares Rabon. “I’ve just realized that people can see through a facade if you are putting one up, and once the real you is able to be seen, everyone will notice and nothing can stop you.”

Congratulations to both guys for coming out!

What did you guys think about their story? Are any of the Adam4Adam readers an out and proud gay jock as well? What’s your experience been like? Share your thoughts with us in the comments section below!