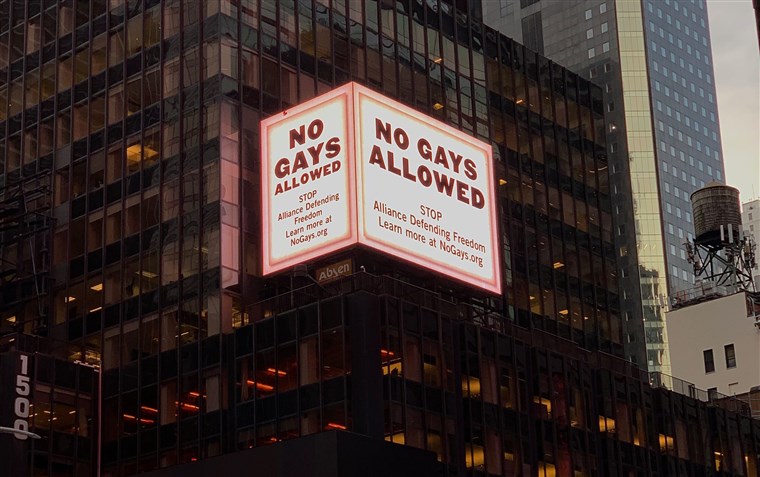 News: Why There’s a “No Gays Allowed” Billboard in Times Square

Amidst a sea of huge billboards in New York City’s Times Square, a particular sign is gaining people’s attention both online and offline, not so much because of its size but rather because of what it says: NO GAYS ALLOWED.

The message would change to “no lesbians allowed, no bisexuals allowed, no trans allowed.” Under it are the words that read: “STOP Alliance Defending Freedom. Learn More at NoGays.org.”

The billboard, owned by an LGBTQ activist group called Citizens for Transparency, was reportedly put up with the intention to “shock and to call attention to the heinous anti-LGBTQ mission of the group Alliance Defending Freedom (ADF).”

But who is ADF and what is their “agenda?”

According to reports, ADF is a legal group “which has been labeled an anti-LGBTQ ‘hate group’ by the Southern Poverty Law Center (SPLC).” SPLC is “an American nonprofit legal advocacy organization specializing in civil rights and public interest litigation” who is “dedicated to fighting hate and bigotry and to seeking justice for the most vulnerable members of our society.”

Allegedly, ADF has “fought for years to undermine lesbian, gay, bisexual, transgender and queer rights, often behind the scenes” and is:

Citizens for Transparency Spokesman Caleb Cade told NBC News, “We want to remind people that there are still really insidious forces at work against our community.” Adding, “ADF has been leading that war for a long time, with tens of millions of dollars to do it.”

For their part, ADF Senior Counsel Jeremy Tedesco called the sign preposterous in an interview. Tedesco explained that when they win cases, they win it for everybody and that they support the rights of everybody; that they would represent a gay group if their first amendment rights were being violated. Tedesco said they have won, among many others, cases protecting students’ free speech rights on campus, defended churches all the time against discriminatory policies that exclude them from benefits and programs simply because they’re religious churches, religious institutions. ADF’s work—according to Tedesco—is broad in scope, that they do a lot of great work, and that they protect everybody’s freedom. Watch the interview below:

On the other hand, netizens who weighed in on the issue were not happy with the billboard but for different reasons:

I guess I’m just wondering how Citizens for Transparency hopes to combat homophobes with a billboard that pretty much just looks like hate speech, the kind that could easily embolden someone with the beliefs C4T apparently wants to stamp out https://t.co/HvUUJIO49N pic.twitter.com/cL13CVKnme

Very well said Logan. You articulated it better than I could. That billboard is ridiculous and it looks homophobic #takeitdown

Good to shine a light on hate! That said however this particular sign is still considered hateful to some of us in the GLBTQI community and should be removed. What if a young gay person saw this and didn’t know they would think NYC hates them

The billboard will remain visible until February but what do you think guys? Should Citizens for Transparency’s “No Gays Allowed” billboard stay or should it be taken down? Sound off in the comments section below!