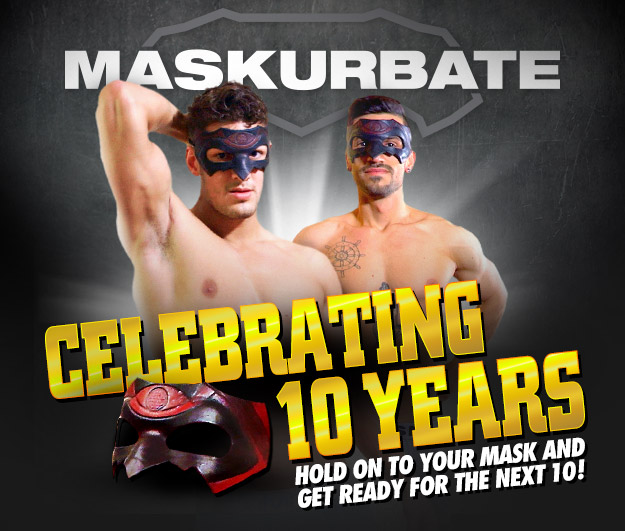 Today I am writing about a wicked cool site called Maskurbate!

What makes this site so unique is its ability to showcase some of the hottest guys out there (many are straight), combined with the mask, that makes this site all the more titillating and has this anonymous vibe. It is somewhat reminiscent of an era in the 1770’s where the societal elite would attend masquerade balls as somewhat of a game among guests. To me it is sort of an early and acceptable form of courting, allowing ones sexual temptations to be acted upon without social stigma. So these hot straight guys can experiment with other guys without being recognized, with the mask.

Enter the 21st Century and we have Pascal’s vision which has purposefully deviated from the norm of what you and I might deem ‘traditional porn’ – two hot guys in a room who go at each other with animal magnetism. Nope – not this site, at least not always. The focus is on the actor and his ability to bring visual stimuli and throbbing hard cocks and mouthwatering hard bodies to the screen.
Its concept was conceived almost by accident – the site curator and operator Pascal hails from the beautiful, eclectic, and electric city of Montreal, Quebec, Canada. I call it the ‘Sin City’ north of the U.S. border. It is filled with a plethora of beautiful men who are as sexually open as they come! It is no wonder that Pascal stumbled into the adult film industry from a simple request to film a guy he met online.

With Halloween around the corner I know some of you guys are planning your sexy costumes, maybe a sexy outfit, a mask? I’d like to know if any of you have developed a lust after that sexy someone whose face is covered but his amazing body is exposed? Ever taken him aside, perhaps to the host’s bedroom to ravish him sexually on a pile of other guest’s coats? How about a little cosplay? Ever partake? I want to hear a wild story about an encounter you’ve had with someone you just met. Was it good? Was it bad? Was it hot? Is this something you’ve ever fantasized about? Add it to the comments section!

Now for the good stuff! An exclusive to Adam4Adam readers, we’ve set up some promotional pricing for a limited time. From October 14th to October 17th pricing is $10.00 for 30 days! Join today HERE!