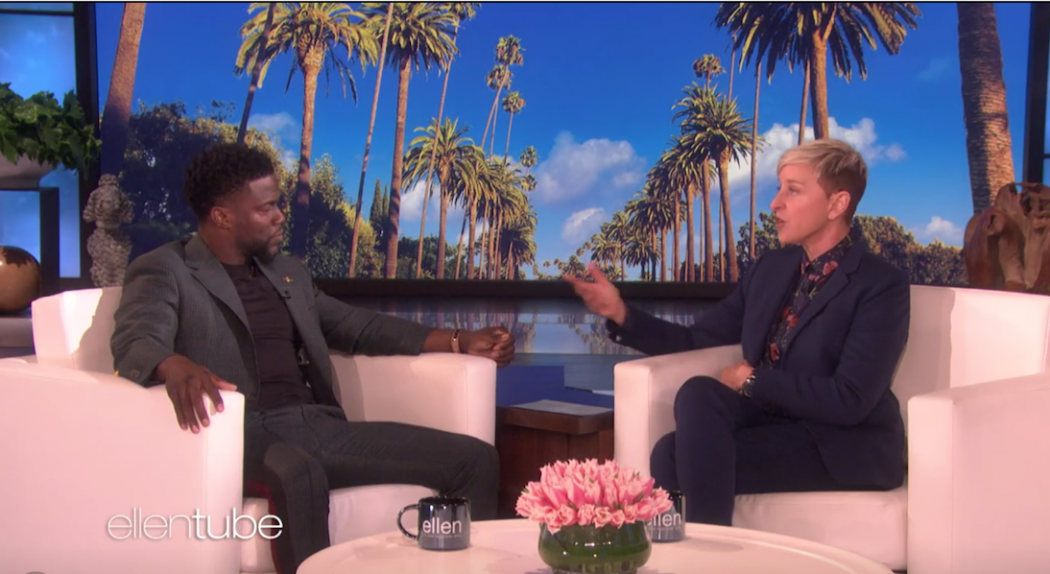 Watch This: Kevin Hart Speaks on “The Ellen Show”

Was Kevin Hart really just being dumb, coming from a place of ignorance when he tweeted and said those jokes on his show, or was he being homophobic?

“I’m not that guy,” American comedian, producer, and actor Kevin Hart tells Ellen DeGeneres on The Ellen Show this Friday. The interview was supposed to air on Monday but Ellen said she decided to show it earlier than planned and not let her viewers wait.

If you are wondering what the deal is, Hart was set to host the Oscars next month. However, he ended up stepping down last December from the gig after his decade-old homophobic tweets and video clips from his Seriously Funny standup special resurfaced.

I have made the choice to step down from hosting this year’s Oscar’s….this is because I do not want to be a distraction on a night that should be celebrated by so many amazing talented artists. I sincerely apologize to the LGBTQ community for my insensitive words from my past.

I wonder when Kevin Hart is gonna start deleting all his old tweets 🤔🤔🤔 pic.twitter.com/ZbYG6SI3Xm

In the interview, Hart tells Ellen, “I know who I am. I know I don’t have a homophobic bone in my body. I know I’ve addressed it, I know I’ve apologized. I know that within my apologies, I’ve taken 10 years to put my apology to work. I’ve yet to go back to that version of the immature comedian that once was. I’ve moved on. I’m cultured. I’m manufactured. I’m a guy that understands now. I look at life through a different lens and because of it, I live life in a different way.”

Hart added, “I had to address it and apologize and say I understand what those words do and how they hurt. I understand why people would be upset, which is why I made the choice to not use them anymore. I don’t joke like that anymore because that was wrong. That was a guy who was just looking for laughs and I don’t do that anymore.”

Naturally, netizens weighed in on the issue. Some said Hart isn’t sincere with his apologies while others say the LGBT community is being overly sensitive.

(1) First, the people who brought up Kevin Hart’s past tweets — like me — were not, as Ellen characterized, “haters.” The host of the Oscars had made anti-gay jokes, and LGBT people who love the Oscars were legitimately startled to see just how harsh his words were. It wasn’t a…

(3) …when @louisvirtel asked Hart about the vaguely homophobic jokes in GET HARD, like Hart affecting an effeminate voice to evoke fear of prison rape, Hart’s response was, “Funny is funny.” That may be a legit perspective; it isn’t an apology. https://t.co/z92Bslbdhr

(5) …Hart may not be aware, but Twitter has a search function that allows anyone to search anyone else’s history. So if you’re curious if a standup comic hired to host the Oscars had used homophobic language in the past, it takes 10 seconds to find out. https://t.co/FQS89q3o6e

(7) …if @TheAcademy wants to hire Hart back after he made the simple act of apologizing for hurtful, harmful, anti-gay language into a vicious conspiracy to ruin his entire life, I’m not sure who “wins” in that scenario, either. (END)

I’m no saint. We just wanted a little understanding, a little explanation. Apologies are tough – they leave you vulnerable. Toxic masculinity is real. I deal with it in my own way too. So on that note, I appreciate @KevinHart4real  apologizing. And apology accepted. That’s all.

Well said.  Freedom of speech is being suppressed by these type of things.  Too many people get to offended by way to little.

Kevin Hart, you’ve made me laugh beyond measure. You’ve gotten me out of dark moments and I can only hope that we (those you’ve brought light to) can support you through this dark time. We know your heart…keep growing and evolving…that should always be applauded and praised!

And Kevin, lets go by your interpretation of things that you already apologized properly. You asked if you have to apologize every time.

Yes. You do. And if you are truly sorry, it should not be hard to.

Because he “apologized” in the past, everyone was supposed to know about that? Most people didn’t know who he was until it was announced he was hosting Oscars. All he had to do was apologize (even if was a “repeat” apology, it would be new info for most of us). But, he refused.

Are you able to share the apology? I tried googling it but all I get is the Rolling Stone interview from 2010 where he says he has to be careful of his jokes because people are more sensitive nowadays.

I hope he hosts the Oscars! This Social Justice Warrior BS of digging up peoples pasts to sling at them now has reached new levels. It is exactly this whole thing that has most people absolutely fed up. I believe PC things like this is why Trump is President (Not exclusively this

Oh come on.. so many comedians have crossed lines when making jokes.. Kevin made mistakes 10 years ago I mean 10 years people. MOVE ON..he apologized and changed his life cause of it what more apology than learn from mistakes

Ellen crushed my heart. I don’t care what this Kevin thinks of me, I’m used to it. Ellen broke my heart.

I’ve been trying to find his past apologies, too, but I’m having a hard time finding them (links welcome!)

I’ve found defenses of context and “I’m sorry you got hurt” type statements, but no genuine apologies, yet. I want to believe they’re out there.

I love @TheEllenShow but it’s presumptuous of you (or me!) to accept the “apology” of @KevinHart4real for the entire #LGBTQ community – especially queer people of color. Those who were truly harmed by his comments don’t have your platform or privilege. #KevinHart #Ellen

@TheEllenShow as a pillar of the LQBTQ community you should protect and advocate for ALL parts of our community. You forgiving @KevinHart4real for something that directly affects the most vulnerable part of the community is more than disappointing. pic.twitter.com/RTgtTLkjts

Ellen DeGeneres is currently facing a backlash what with her publicly “forgiving, defending, and siding” with Kevin Hart. All we can say is that the issue has now officially become a saga.