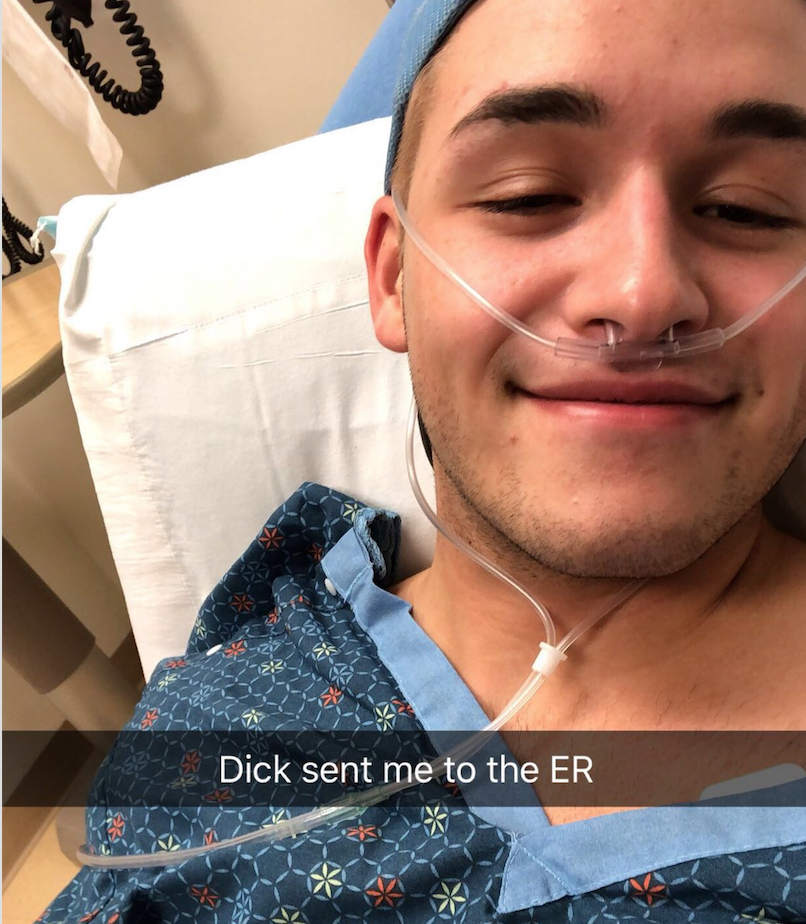 You never would have thought something like this is possible until it happened to someone else but yes, sucking a 10-inch cock has landed people in the hospital. Granted, the chance of getting a ruptured airway because of oral sex is “one in millions, maybe hundreds in millions” but it does happen. Suck—I mean—such, is the story of Fredy Alanis, a 19-year-old guy from Chicago.

Fredy related in an interview with them that after he blew his 23-year-old neighbor, he felt this soreness in his chest but he chose to ignore it because it didn’t hurt that bad. However, he woke up the next morning to a sharp pain in his chest that made him hunch over and cry. It hurt so bad his mom had to drive him to the hospital where he was told he had a rupture in his airway. Fredy confessed he couldn’t tell the doctors the truth right away because he was with his mom but he eventually did so he could be “treated the right way.” He proceeded to stay in the hospital for the next three days.

I just want to make it very clear that I DID NOT call myself a whore lmfao I said I didn’t tell my family about this situation because I didn’t want them to think I was a whore omfg pic.twitter.com/UcaMFi30ax

As proof that Fredy took the incident in stride, he even captured a selfie while in his hospital bed although it did take him over seven months to talk about it (it happened in January).

Excuse the bad angle but remember when I sucked a hulk sized dick and ended up in the ER afterwards LMFAO never forget pic.twitter.com/dvaEITTcVs

His tweet naturally went viral. Take a look at some of the reactions below.

I’ve never died so much over a single tweet. 😂

Your satisfying smile said it all..🍆💦

Just imagine if it went in the other hole! 😂😂😂 Glad you’re better.

not all heroes wear capes. pic.twitter.com/r17Ut8VrSZ

Pic or it didn’t happen 👀

I can tell from the smile on your face it was well worth it lol.

Oh dear! Did you improve your technique since 🙊

Omg, can we see a picture of the dick that cause you that? 😂

Does he still see the guy with the 10-10.5 inches dick that landed him in the hospital? Yes, yes, he does. The guy was remorseful and is now a “lot less rough,” Fredy says. In conclusion, Fredy advised everybody not to be intimidated by penis size but at the same time, he reminded everyone not to play too rough.